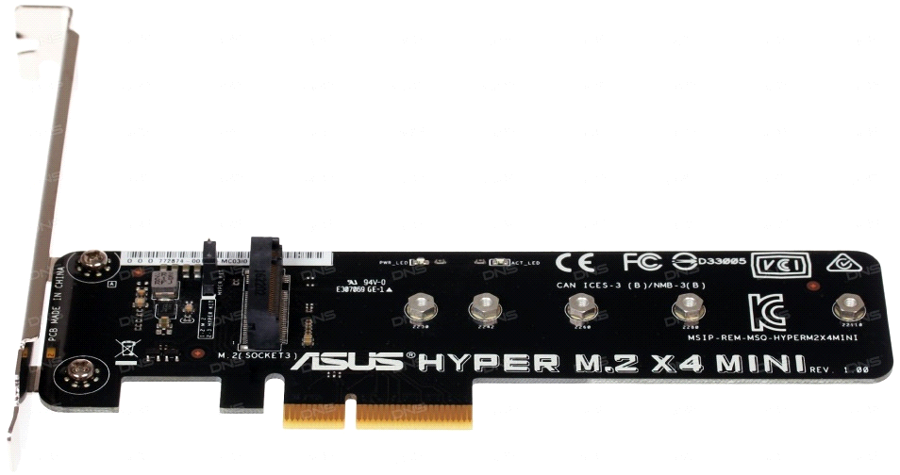 The ASUS HYPER M.2 X4 MINI model is a low-profile expansion board, which includes support for a PCI-E x4 interface without restrictions regarding the interface version. The X4 labelling indicates support for 4 lines of the PCI-E interface, which ensures maximum performance of data transfer via the adapter. The adapter, which is solely compatible with M.2 SSD models that support PCI-E, is intended for internal installation and does not have external ports. The construction of the adapter allows for installing M.2 drives of various sizes: from 2242 to 22110 (which corresponds to the sizes 22×42 and 22×110, respectively), which ensures additional flexibility when planning hardware configurations for existing processes.

Table 1. A standard reading and writing performance test with a fixed load pattern (number of threads and queue depth is 4×16).

Table 2. Random reading test for a 4k block with a fixed number of threads and varying queue depth (1 to 64).

Performance results obtained during comparison tests in various read and write modes demonstrate that the ASUS HYPER M.2 X4 MINI model can be successfully used in existing hardware configurations when it is necessary to increase the overall performance and speed of reading and writing data by means of SSD drives without costly hardware upgrades, which implies purchase of new motherboards that include an M.2 slot.

This significantly increases flexibility when a configuration is selected, as the ASUS HYPER M.2 X4 MINI adapter has an ideal price/performance ratio and helps to greatly reduce the system’s total cost of ownership.

Further, support for 4 lines of the PCI-E interface without any restrictions on the interface version (due to a simple hardware configuration, without additional controllers and with a simple power converter) and various M.2 SSD drive-sizes greatly increases application and subsequent upgrade options using previous-generation data media.

Views Today
2
Return to all posts

From an HDD the size of a cabinet to a modern SSD in 2.5” size!
The following two tabs change content below.